With lots of joy, we are sharing an article by our friend Paul Rouse from the Naturist Travel on NAKED the Retreat.

For some people, being naked is simply about taking your clothes off: at home, on holiday, or as part of a social activity. For Simon Paul Sutton and Dara Stara, the organisers of the Naked the Retreat series of residential workshops, there’s far more to it than that. Called Naked for short, the seven-day events, held on a regular basis since 2014 in a range of locations including Malta, Portugal, Sicily, Cambodia, Bali and the Dominican Republic, are described as a physical, emotional and mental journey. Combining yoga, dance, meditation, open communication, group activities and healthy eating, participants are encouraged not only to embrace nudity, but also get naked in words, actions, feelings and thoughts, stripping themselves of emotional baggage such as lies, conditioning, rejection and negative self-image.

“The idea of Naked”, explains Dara, “goes way beyond a relaxed holiday spent in the nude. The retreats are fun of course, as is being naked, but we also encourage people to dive beneath their skin, and their attachments, past histories and identifications. We start by all taking our clothes of, and use this as an analogy for becoming innocent and equal. But the deeper nakedness begins there: the programmes are both intense and intensive. Each day, we start in the morning and end in the evening. There is very little idle time, and we stay in the group environment and use it as a melting pot for self- exploration and creativity.

Simon adds: “You could say that we play hard and take our fun seriously. But we are neither some far-out gurus, nor claim to know anything that you don’t. We simply have refused to let the fear of change that lurks within the human psyche make us unhappy, or old before our time. We want to show people how to live a life that is vibrant, dynamic, unpredictable and bold, even when life throws us curve balls. We don’t rely on external stimuli, drugs, alcohol or substitute joys to connect to life, and try to show how we can all return to what should be our natural innocent and free-spirited nature.” Concept
Naked might not be everybody’s cup of herbal tea, but five years in, it remains a popular concept, adding new locations, evolving in format, and attracting participants from all over the world from a variety of backgrounds and lifestyles. Many are in the 25-45 age bracket (from the supposed ‘lost’ generation of naturists?) but the retreats also bring in younger and older guests, some still trying to find themselves, others wondering where their old self went.

Dara and Simon, who are partners in life as well as business, currently live in Malta along with Dara’s five-year old daughter Maya. And their own ‘journey’ to where they are now has been as interesting as any of the participants on the Naked retreats.

A singer-songwriter, yoga teacher and event organiser, German-born Dara explains that she was “introduced to a range of paranormal phenomena at a very young age by my exceptionally free-spirited mother, which led me on a path of spirituality. But I spent most of my 20s hiding in a failing relationship to a successful businessman, chasing the idea that happiness can be found just in material things.” Simon, originally from High Wycombe, was a troubled teen who got involved in drugs and crime, and spent a brief period in prison before enrolling on a performing arts course and becoming an actor. His credits have included playing opposite David Jason in Diamond Geezer, and as the young Frank Butcher in an EastEnders spin-of, but given the precarious nature of the profession, the second string to his bow was as a facilitator, mentor and workshop host. The couple met in Malta in 2014, where the idea of Naked evolved “We lived with my daughter and another friend,” says Dara, “and the summers in Malta are so hot that you simply don’t want to wear clothes. I grew up in eastern Germany where naturism was part of the national identity. It was always very natural to run around naked. We lived in a house with a big secluded garden, and together with 12 members of my family, from great-grandma to grandchildren, we spent time naked in our home sauna, under the garden hose or simply around the house.”

Simon (being British, Dara laughs) “had not been exposed to this sort of ease around nudity in his childhood, but once he experienced the freedom of us all in the house in Malta, it started to become very natural to him. Inspired by our own naked hot summer, in which we were living so peacefully together, practising yoga, dance and other forms of movement, communicating transparently and eating healthy vegan food, we decided that we wanted to share this lifestyle with others, and the concept of Naked was born.

“It took us only two months from that moment of inspiration to the launch of the first retreat. Website, programme, photoshoot, promotion, location search and 14 people signed up: all within a matter of weeks. It owed so naturally and easily. When it came to the pricing of our first venture, we took a great leap of faith, and decided to ‘gift’ the first retreat. We had no set price tag for the experience, and decided that all people needed to do was get themselves to Malta and enjoy seven transformational days. At the end they were invited to gift forward what they wanted to contribute to help with the continuation of the project.

“It might not be a conventional business model, but it worked, for a number of reasons. First, it created a very equal space where we all came together to make this retreat a memorable experience. Second, it established and shaped our idea of establishing a Naked community of like-minded souls connecting and co-creating around the globe. And third, it stripped away the concept of money and value as designed by our increasingly consumerist and material society.” as get themselves to Malta and enjoy seven transformational days. At the end they were invited to gift forward what they wanted to contribute to help with the continuation of the project.

If all that sounds a little idealistic, it is worth noting that, as Simon points out, “at Naked we don’t consider or call ourselves a company or business”. Having said that, neither do the couple have bottomless pockets, and after the first retreat, tweaked the terms a little, to ensure they could at least cover their expenses. Naked now asks for an initial contribution that takes care of all fixed costs such as accommodation, food, materials and a chef. At the end of each retreat, participants are then invited to ‘gift forward’ towards the continuation of Naked and to support the community. “It’s important to understand that we don’t make any profit on the initial contribution,” says Simon. “Yes, we have been told we are crazy and this does not make business sense. But we live our lives entirely on the ‘gift economy’. In our view it challenges minds and expands hearts, and is based on mutual trust. Some people get it instantly, others have real trouble understanding how and why the hell we are doing what we are doing. But the gift keeps surprising and supporting us in many unexpected ways, and our courage, gratitude and trust grows every single day.” Overheads are kept to a minimum, helped by the fact that, as Dara explains, “we have never had to do a lot of marketing other than promotion through Facebook, YouTube and Instagram. Most of the participants come to us because of word-of-mouth or because they find us randomly or serendipitously. And we choose to be subtle. Displayed nudity in social media is easily used to raise attention, but it is mostly just as fleeting. Naked gets noticed, but not necessarily always for the right reasons, and you learn as you go along. Simon and I have both been Facebook ‘jailed’ a number of times, due to posting images that didn’t align with their strict community guidelines. We have eased of on that platform.” Overall, Dara and Simon live what they describe as “a minimalist lifestyle, ridding ourselves routinely from any unnecessary clutter and baggage.” Naked is their main priority, but they also plan to take a short break later this year to focus on completing several ongoing projects, including a book, an online course, and Dara’s first music album, which will also be called Naked. In the meantime, there are still Naked retreats to concentrate on, with the next one coming up in the Dominican Republic in April. Plans are also in the making to hold a Naked ‘reunion’ of past participants this summer, at a location is southern Europe still to be determined.

There are also longer-term objectives, including themed Naked retreats, teaching the concept to others in order to recruit a worldwide team of facilitators, a Naked festival (organised in conjunction with Malta-based Global Green Events), and the establishment of a permanent Naked centre designed to reduce the couple’s travel times and costs, and their impact on the environment. Getting the concept of Naked to where it is today has not been without its challenges, of course. Dara and Simon were on the wrong end of a property rental scam in the early days, and just last year had to make a last-minute change of location when the venue in central Portugal they had booked burned down in a forest fire just weeks before their retreat was due to take place. But ‘the good life’ on the whole seems pretty good. The couple are firm believers in practicing what they preach, and at the end of this year’s retreat in the Dominican Republic for instance will stay on for a further two weeks dedicating their time and energy to help a local school for underprivileged children.

Paying it forward goes all ways. 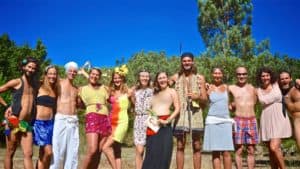 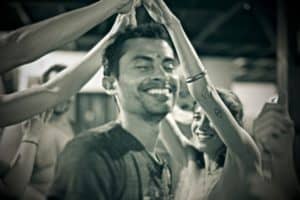